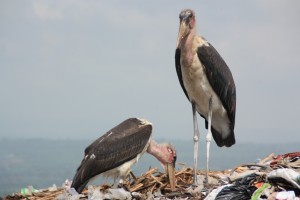 Marabou stork at the Gioto dump site. Residents at the site want The Star newspaper to apologize to them for an article that has allegedly linked their members to the Al-Shabaab terror group (Photo/Kioko).

Residents of the Gioto dump site in Nakuru are unhappy with The Star newspaper following a story the paper published that they claim has linked some of their members to the Al-Shabaab terror group.

The story in question was published by the newspaper on Thursday June 11 and alleged that a section of teens residing in the streets of Nakuru had been approached by unknown persons who asked them to join the terror group.

What irks the residents in the story is not so much its content but the photo that the paper used to go along with the story. The photo which was picked from a 2010 file shows a group of ‘street children’ and among them at least two happen to currently be “working” at the dump site.

These two now say their presence in that photo has brought them untold anguish as they claim they are being referred to as “Al-Shabaab.” Due to this they say they fear for their lives, both from the public and from the authorities.

“I am afraid that I may be marked as a wanted person. I request fellow residents to stop calling me Al-Shabaab,”

said Paul Ng’ang’a one of the then street children captured in the photo.

Ng’ang’a says he does not even remember ever posing for a photo with a photographer attached to The Star newspaper.

A Gioto resident with a cutting of the article the residents are unhappy with. They claim it identifies some of their members negatively (Photo/Kioko).

“We want to meet the writer of the article so we can ask where we met to give the story,” he says partly because he may not have been interviewed in the Al-Shabaab story.

“When my wife heard about this story she cried asking whether it was true,” says Kennedy Kinyua another Gioto resident who also appears in the photo.

“I wouldn’t want to join the Al-Shabaab, it is akin to betraying your country” he adds.

The Gioto residents add that among those in the photo is a man who recently died in a fire inferno at the site and another who relocated to Kisumu. They insist, basing on the content of the article the paper was insensitive to them and even demand an apology.

“The writer has defamed us, they only wanted propaganda so as to sell their paper,” says Lucy Wambui the chief leader at the site.

There have been reports about youth in different parts of the country being approached by the Al-Shabaab terror group with promises of good rewards. And during the last Madaraka Day celebrations the Nakuru County Commissioner Mohammed Birik gave a stern warning to youth in the county who he said the authorities were aware had been approached to join the group. While Birik sounded like he had enough information about the issue it is not clear whether he was referring to the youth quoted in the story.

Contacted by Kenya Monitor, an editor with The Star asked the residents to write to the newspaper and lodge a formal complain.