Makueni County Government has a new County Secretary (CS). Joshua Wambua was sworn in the presence of Governor Kivutha Kibwana as the new head of public service following a successful interview and approval by the County Assembly.

Members of the County Assembly unanimously supported the appointment of Wambua. Nguumo MCA John Mwenze while voting in support of the report for the approval, said Wambua was suitable for the position due to his impressive credentials and experience in the public sector.

“He has the experience needed to be the county secretary and with the signing of the county performance contracting Wambua will ensure timely implementation,” said Mwenze.

Nominated MCA Gideon Mwango (Wiper) described Wambua as a person of high integrity that the county government will not regret having as the CS.

The position fell vacant in 2014 after the former County Secretary John Muteti was sacked by Governor Kibwana following a tree planting scam that saw the county lose millions of money.

Subsequently, the Acting County Secretary Rael Muthoka who took over the office from Muteti was suspended from work last month together with other seven members of the tender committee for flouting procurement in the establishment of Kikima Dairy project in Mbooni Sub County.

Before the appointment, Wambua was serving as the Trade and Tourism Executive a position he held since February 2014. Previously he served as the Finance Executive before he was moved to the trade docket following a reshuffle.

In his acceptance speech, the new CS promised to re-organize the county executive to ensure faster implementation of development to the people of Makueni besides establishing a working relationship between the executive and the legislative arm of the government.

Wambua holds a Masters of Business Administration Degree with a major in Finance from University of Nairobi and a degree in Business Administration in Finance. He is a fellow of the Institute of Certified Public Secretaries of Kenya. In 2012, he was awarded the Moran of the Burning Spear (MBS) by the President Mwai Kibaki for his outstanding contribution to the nation building.

Residents took to Facebook to congratulate the new CS. 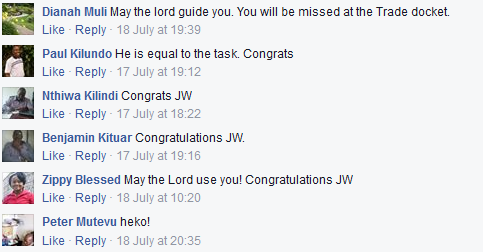 The County Secretary post is a key position that is instrumental in driving the development agenda of the County Government. Residents of Makueni can only hope that Wambua will inject new blood and energy that will enhance service delivery in a county that is already reeling under poor service occasioned by the persistent wrangling between the Governor and MCAs.