Snippets of speeches by President Obama, Uhuru at the opening of the GES Summit 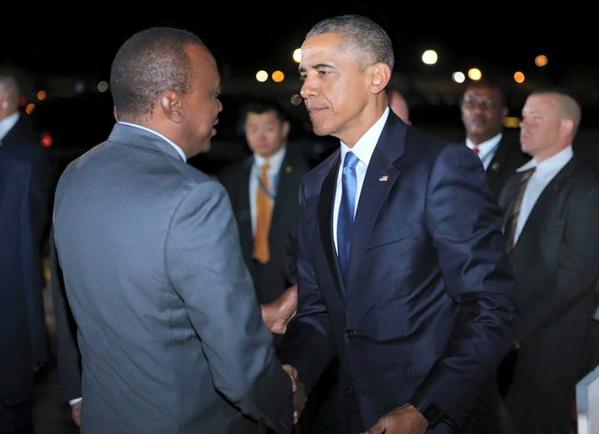 President Barrack Obama and President Uhuru Kenyatta co-hosted the sixth global entrepreneurship summit this morning at the UN Complex in Nairobi, Kenya. Internet users especially on Twitter provided a sneak peak into what they said at the Global Entrepreneurship Summit (GES) 2015.

With my co-host @POTUS during the official opening of #GES2015Kenya at the United Nations Headquarters in Gigiri pic.twitter.com/473RbT48zK

President Kenyatta: “We cannot claim perfection but without a doubt we can claim progress” #GES2015Kenya #ChooseKenya

Kindly find on the link the speech by H.E. Uhuru Kenyatta during the opening of the Global Entrepreneurship Summit: https://t.co/BGNLuBS9px

We are not aligned East or West. We are aligned to progress – President Uhuru #GES2015 #ObamaInKenya

“Africa is on the move,” says @POTUS Barack Obama, on the first full day of his Kenyan visit http://t.co/4FfKt9T1tk pic.twitter.com/QR4CopnmMR

Obama: If half of your team is not playing, you have a problem. In many countries, half of the the team is women and youth #ObamaReturns

Obama: “Women are powerhouse entrepreneurs. When women succeed, they invest more in their families and communities. #GES2015Kenya #TheTruth

Kenyatta to Obama: Tell the world what you’ve seen in Kenya. “Let them know that Africa is open and ready for business.”

“While I was here in Nairobi 10yrs ago, it looks very different that it did then.” Obama, you haven’t even seen the grass! #ObamaHomecoming

Perhaps some skepticism or caution and pragmatism should inform our way forward, post GES Summit

If one only thing could transfer from Obama to Uhuru, I wish it would be an obsession with creating jobs not tenderpreneuers. #GES2015Kenya