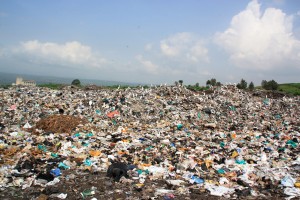 A section of Gioto dumpsite in Nakuru county. Nakuru town is not as clean as it used to be in past years (Photo: Kioko Kivandi).

Nakuru town was once known throughout Africa, and by extension the whole world, to be the cleanest of all towns in East Africa. So clean was it that it is said, a question about it would be tested in exams in the country.

But that now is history for the town that is famous with flamingos. From a glittering town, Nakuru has been transformed into a littering town. Poor infrastructure and poorly coordinated solid waste disposal mechanisms form the narrative of its current state of affairs.

Every time it rains it is given that raw sewage pipes will burst and their content will leak and flow, sometimes even from the center of the town. This situation is even worse in estates where low income earners live such as Rhonda, Ponda Mali and Kaptembwo.

In the recent months cholera outbreak that led to the death of over 60 people in the country, the county lost at least 10 people to the water borne disease that is caused by poor sanitation. And as we get ready for what looks like another rainy season, not much has been done on clearing solid waste that can lead to the blockage of our sewerage system and hence lead us to the mess we always find ourselves in every other day.

Even as we speak, the town is filthy with rubbish heaps right from its center. One wonders why for instance the County government has not cleaned the rubbish that was dumped at the Gate House roundabout a few weeks ago during the crackdown on illicit brews. Once it rains, such rubbish will be drained into the sewerage system and block it.

Besides to continue having the rubbish heap at the roundabout, which is the main gateway into the town, for all this time says a lot about the commitment of the County government to solid waste disposal in the town. It shows the government is not much concerned on the state of cleanliness of the town let alone laying down the necessary measures that will ensure Nakuru regains its former glory.

It is because of this that I urge the County Executive Committee member Richard Rop to show direction on delivering this dream of a clean Nakuru.

First he should clean the mess at the roundabout as he has no reason why the heap of broken glasses should continue being an eye sore at the town. He should also clean all other regions with heaps of garbage in the town. This he should do as he strengthens garbage collection strategies so that the town is eased from solid waste.

A clean environment not only leads to a healthy community but leads to an improved economy as investors want to put their money in regions that are clean. I long for that time when Nakuru will regain its lost glory. And this I am sure is the dream of every resident in the town.