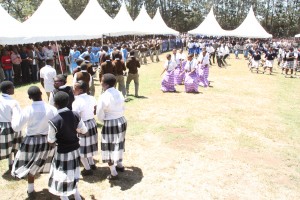 A Nakuru Catholic Priest has asked the government to be considerate with the teachers issue and have dialogue with them. Speaking to Kenya Monitor after celebrating mass for this year’s Form Four candidates at the Christ the King Academy in Nakuru, Fr. Stephen Nyamweya said that was the only way to solve the dispute.

“The government should show some honesty. I don’t want to believe that the government wants to trash the court order,”

Just before the start of the third term a court ruled that teachers should be awarded a 50-60 percent salary increase sparking celebrations among members of teachers’ unions across the nation. But the government has insisted that it is unable to fulfill the court order.

“To meet the award VAT (Value Added Tax) will rise to 22 percent up from 16 percent,”

said the President adding that the award would also affect the provision of essential services as well as cripple certain critical departments such as health.

the President pleaded with a teachers in his night address, a call that Fr. Nyamweya had also made in the day.

“We are asking the teachers to also be considerate,”

said the Priest who also sits in the Nakuru County Education Board.

But Fr. Nyamweya asked the government to seal all the loopholes through which the country has been losing money especially through corruption and other bad governance practices.

“We can’t say we have no money. If there was proper governance, there would be more money even to give other sectors.”

This is the fourth week since the teachers downed their tools awaiting the government to honor the directive on the salary award. The government has however been saying that the strike is unprotected with the Teachers Service Commission (TSC) threatening that it will not pay them their September salary. The Ministry of Education has since given a directive to close all close as the school calendar is revised.

“Its unfortunate that it has come to this level. The government should have seen it coming. Nobody is happy that we have reached where we are,” added Fr. Nyamweya.

During the candidates mass students lit candles and signed pledges to be peace ambassadors. Francis Waithaka, the local coordinator of Santegidio, a religious organization that organized the peace pledge event with the diocesan youth office said they wanted to instill good morals among the students.

“We wanted to tell them that they have a chance to change the world through peace,” he said.

Even with ongoing teachers strike the government has assured final year students in both Primary and Secondary schools that their exams will go on as scheduled.