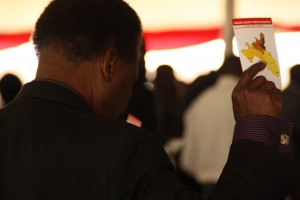 On Friday October 2 the county government of Nakuru held a prayer breakfast that brought together a cross section of leaders from different sectors of the county.

The event which is the first in history saw the residents reflect on the history of the county that was the administrative center of the Rift Valley province in the past days. Actually to date the office of the Regional Coordinator (arguably a Provincial Commissioner) still sits at the county.

Key among the aspects of the county’s past that residents reflected about is its history of ethnic and political violence spanning from the days of retired President Daniel Moi’s regime and which hit its worst in 2007/2008. 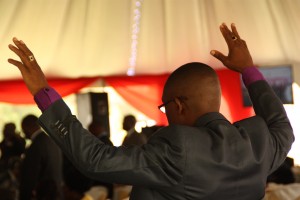 The theme of the event was fostering unity in diversity ( Photo: Kioko Kivandi).

So notable about this history of violence and its connection to the county is the fact, the ethnic clashes of the 1990’s are usually traced to the county. Again, Nakuru is one of the counties that were heavily hit by the 2007/2008 post election violence.

Thus as different speakers took to the podium they had a way of going back to this history. But most importantly, the prayer breakfast was also used as an opportunity to reflect on the culture of diversity that is celebrated in the county. Of central mention by most speakers was the belief (or myth) that, Nakuru is a special county in the country that has the ability to determine the direction of the rest of the country.

Below is a collection of selected quotes from the speakers at the event in which Nakuru Town East MP David Gikaria declared he had cleared his issues with the Governor Kinuthia Mbugua. The two had been at logger heads for a while.

“Unless you are a fool, you can’t say you don’t know where we are coming from.”
” Nakuru is the heart beat of the Rift Valley and the whole nation.”
“Counties are young and you can’t expect a child to be born and start walking.”

“It is God who appoints leaders. If you an MCA (Member of County Assembly) then you know you are fulfilling the will of God.” This was the first prayer breakfast in the county (Photo: Kioko Kivandi).

“It is said that Africa is one of the richest continents but her people are poor. Why? It is because of leadership.”

“Our unity must begin even in our diversity of thoughts. To think differently is actually healthy.”
“The county we are building today belongs to tomorrow. Listen to the young voices. They too have a story to tell.”
“I have authored a book – The girl who dared to Dream – but not dreams that are empty. Our big dreams will say there is something extra.”
“People do not care how much you know, they care how much you care about them.”

“Our propensity to go back to where we have come from is very high. We can only overcome that by being disciplined.”

“A lot has been said about leadership. I want to introduce something new. Spirituality.” At the event MP Gikaria declared he had mended his ways with Governor Mbugua (Photo: Kioko Kivandi).

“Let us work for the people of Nakuru County because they are the ones who elected us.”

“This county is ours, Kenya is ours and we should come together.”

“We love (Samuel) Arama, but we usually deal with him like a child who has come with its mother.”

“Even Peter denied Jesus three times but finally he repented. I am now born again. I got saved two weeks ago.”

“We always say that when you see boys fighting, there are always old men sitting behind them.”

The chief guest was Dr. Betty Gikonyo and the theme for the event was ‘fostering unity in diversity’.