Maseno University politics turns tragic as a student is killed 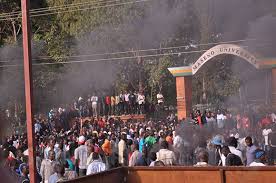 Maseno University has been closed indefinitely following a night incident where a student was killed and 17 others injured where seven are admitted at a referral hospital in Kisumu.

A circular pinned in notice board , which is signed by acting Vice Chancellor, indicated that the institution has closed due to unfavorable conditions caused by the incidence.

“The University senate therefore decided that the University be closed with immediate effect. Students have 30 minutes to vacate the university premises,” reads a part of the circular.

Students had earlier in the morning taken into streets to demonstrate over General Service Unit (GSU) police officers in the institution, whom they allege had killed one of the students. This is after first year student is alleged to have been killed by the officers maintaining peace in the institution ahead of Student Organization Of Maseno University (SOMU) election on Thursday and Friday this week.

Joshua Mungai, the deceased is said to have been from Millennium complex lecture hall on Monday, October 12 when he met the officers in his way to his hostel in college campus where they acted on him till he lost his life. The riots disrupted morning classes as students demanded justice for their fellow comrade where they claim that he was killed while they had maintained peace.

Controversy in the institution began when a fourth year media student, Collins Kitiato mysteriously lost his life after he claimed his life was in danger due to support of a lady candidate for the finance post ahead of elections. The family of the deceased complained of how the institution treated the death claiming that they showed minimal concern about their kin.

“I am the next of kin to the student and the university has my records including my contacts. I wonder why I had to get the information from other quarters and three days after the death. Even the authorities have not called us,”

Later last week, fire broke into the institution burning the administration block and the office of Student Welfare Service where the cause was linked to the student elections by some students from the institution. Students have taken to the social media their complains about the police officers whom they accuse of causing more violence instead of peace. On Twitter under the #tag, #justiceforjoshua, the students consoled the family of the deceased and Maseno family at large.

The student died a few minutes after arrival at the hospital. Cause of death not yet established #justiceforjoshua — Dr Reinhard (@Am_Reinhardth) October 13, 2015

#justiceforJoshua he was an investment that cannot be reinstated. Too soon gone May his soul rest in peace @MwassJonte

One Joshua Mungai of Maseno university passed on yesterday at 9.40pm after a beating from the police #justiceforjoshua — Dr Reinhard (@Am_Reinhardth) October 13, 2015

Education is an investment.When a stdnt dies when in the system it’s a grt loss both to the family and community at large. #justiceforjoshua

Jaramogi Oginga Odinga University of Science and Technology (JOOUST) from the same region was closed indefinitely last week due to student’s election wriggles.

The Vice Chancellor Academic Affairs Prof. Joseph Bosire confirmed the closure and said re opening dates would be confirmed later.

“The disputed election results were that of the Secretary General, a post which had two contestants. One of them refused to concede defeat which led to his supporters becoming unruly,” said Bosire.