“Cutting girls is something our people have done for hundreds of years,”

“No one can convince us that it is wrong.”

The women believe that an uncut woman has sexual feelings for every man she comes across, and is likely to stray from her marriage. In fact, they see FGM as a tool to curb the spread of HIV & AIDS in their community.

“When you cut a girl, you know she will remain pure until she gets married, and that after marriage, she will be faithful,” Nashilu explained.

“But when you leave a girl uncut, she sleeps with any man and brings the disease into the community.”

Asked about cleanliness during the procedure, the women say nowadays they use different disposable razor blades for each girl, instead of the traditional use of one knife to cut several girls. In addition, they now use gloves and have replaced the cowhide base sheet with a plastic one.

Toshi Mahmoud, cut just a month ago, is 11 years old and still has the bright-eyed curiosity and boundless energy of a young girl. She does well in school, is popular with her friends, and seems to have a happy, carefree existence.

Born into the very traditional community of Ol Donyo Nyokie in Kajiado, Toshi had no qualms about relating her own experience, but winced as she recalled the pain she endured when the practitioner sliced her clitoris off.

“She (the surgeon) slept in the same bed as me the night before. My mother woke me up at six o’clock in the morning and poured a bucket of ice-cold water over me, and then I was taken back into the hut and cut,”

she said in Kiswahili.

At just 11 years of age, Toshi is below the traditional age of cutting, but said that often, when the oldest girl came of age, her parents might have all her younger sisters cut to save the cost of having several ceremonies. 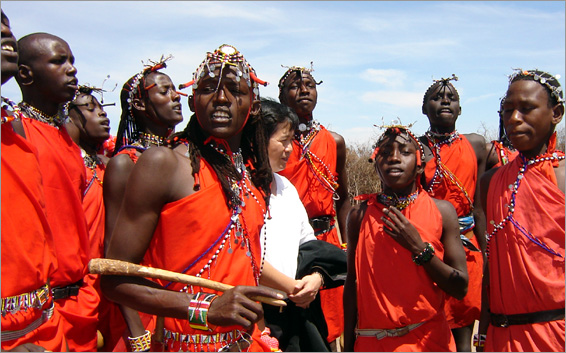 Maasai Morans. One of them says that FGM is a practice that should not be eliminated from their culture. [Photo: Malachi Motano]

She said that she dreaded the pain, but looked forward to ‘becoming a woman’ – she wanted to be cut because it would make her more acceptable in the eyes of her peers and her community.

“If you are not cut, no one wants to talk to you; the girls and boys in school laugh at you because you are still a child. No man will want to marry or have sex with you if you are not cut.”

But Toshi said that despite her own willingness to be cut, she did not support the practice of FGM, and insisted that she would not permit her own children to be circumcised.

“We are taught in our school health club that FGM is a harmful practice, and I wish the Maasai would stop forcing girls to do it,” she said.

Several circumcised teenage girls in Ol Donyo Nyokie say they would never put their own children through FGM, having been educated about the dangers of the practice. They were adamant that they would not bow to the community’s pressure to have their daughters cut, as many of their parents had.

Toshi and her friends, who were all circumcised in the same month, described how their wounds were coated with a paste made from cow dung and milk fat to stop the bleeding and accelerate healing; all maintained they had healed perfectly, and said they had never heard of any deaths

However, the head teacher of the Ol Donyo Nyokie Primary School, Rebecca Pateli, says, there have been several incidents of injury and even death from FGM.

“You hear of girls who die, but there is never an admission that it was FGM-related. The practice is so hidden that it is hard to know how many, but they do get sick, and some die,” she said.

The young men in the community, known as ‘moran’, or warriors, strongly believe that FGM is a useful practice that keeps women chaste.

“I am married to a woman who is cut, and will be cutting my daughter when the time comes. You cannot claim to be a Maasai man or woman if you are not circumcised,”

In fact, the girls in the community reported that men were the biggest hindrance to the fight against FGM, because they continued to reject women who were uncut. Samson Ntore, a community-based health worker with the African Medical Research Foundation (AMREF), said most practitioners in Ol Donyo Nyokie had greatly reduced the severity of the cut, and merely made a symbolic incision rather than removing the entire clitoris.

However, the women could not make this public knowledge, for fear of the repercussions if they were found to be shirking their duties.

The Ol Donyo Nyokie community is a society fighting to cling to their ways in the face of pressure to change from all sides. Most of them support education, and education tells them to abandon FGM.

Today, the prevalence rate of FGM in this community is still 100 percent. But the young girls of the community insist that their daughters will never have to undergo the painful procedure.