Schooling under the gun common in Turkana

As many different school motto’s read; Education is the Key to success, Knowledge is light, profession is power and the general belief that it is education that transforms young boys and girls into useful men and women in the society, learning in the pastoral communities in Kenya continue to face many hurdles.

This writer traveled to Turkana and learned that pupils in the area are escorted to school by police reservists, studying in makeshift classrooms among many other challenges. All in the name of getting an education.

Ignatius Omukaga is the headmaster at Nawoyaregae Primary School in Kaputir Location in Turkana County.

“The pupils cannot attend classes daily. Sometimes you may go to a classroom and find just a handful of them. This may go on for months. Again, school lasts just four hours so that children make it home early because of insecurity. The children are afraid. There are armed bandits hiding with stolen animals in the thickets behind the School.”

The continued cattle rustling between the neighboring Turkana and Pokot communities are the order of the day in this area. A long tradition of cattle raiding has been sharpened by competition over grazing land and water.

In the Turkana South District where Kaputir is found, primary school net enrollment is below average (about 26 percent) compared to a national ratio of 82.01 according to a World Bank Kenya’s Free Primary Education program is like had its work cut out for it here.

Nawoyaregae is a school getting by with what it can, its mud-walled makeshift classrooms already crumbling. Nursery lessons are conducted under a tree, with the young learners, 30 in number, crowded into the available shade, peering at instructions drawn on the battered blackboard.

“The school had more than 350 pupils, but this has fallen to 125. The figure fluctuates, but the trend is steadily downwards. In response, the community has employed the services of a armed police reservist, who accompanies children to and from school,” says Omukaga. This writer with some of the pupils. Learning has many challenges in Turkana. [Photo: Malachi Motano]

Reservist Salim Iro, rifle at the ready, follows the children to play on the school’s field, to the River Turkwell to draw water.

“I escort them every day. I cannot take chances, because when the bandits come, they attack all our people including the children.”

Standing alert, gazing at the pupils from a distance as he caresses the weapon, Iro says,

“This place is volatile. But children must learn; and we must do all we can to ensure their safety when learning.”

Oxfam reports that as many as five pupils are killed in attacks by raiders every year.

In 2007, President Mwai Kibaki’s directive led to the recruitment of Kenya Police Reservists in bandit-hit areas, this has not addressed the security situation because of inadequate numbers.

Charles Lopuya is a local Chief,

“Only one police reservist is deployed to each of the three schools in the region, which are about 10 kilometres apart. This is insufficient to provide adequate protection. He wants about six reservists for Nawoyaregae.”

Development organizations in the area say the communities face a dilemma: insecurity keeps children away from school, but education is the key to solving such conflicts with traditional roots.

“To address this, we need to achieve some level of education and use it to build peace in communities. Providing opportunity for education to the young generation and helping them understand the role of peace in development is critical,” 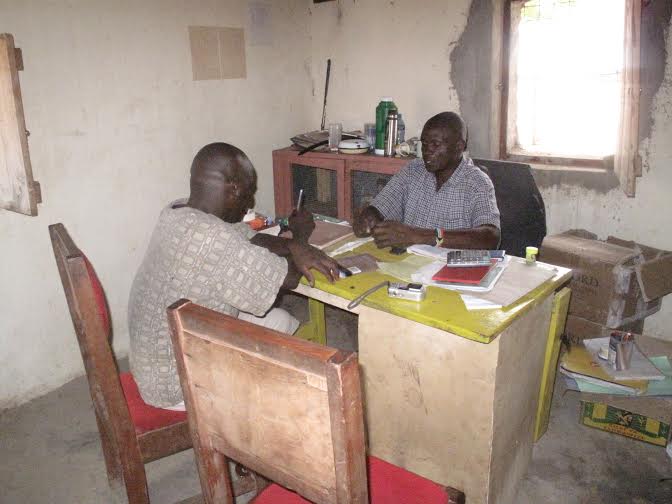 The writer with the headmaster, Ignatius Omukaga . Human resources lack is also a challenge to education in this area. [Photo:  Malachi Motano]

Joyce Emanukor is, and Education officer at Oxfam in Turkana.

“I am concerned by how the prevailing insecurity has uprooted children from schools, particularly those on the Pokot border, forcing them to relocate to facilities in other areas, resulting in massive overcrowding. These facilities are overstretched. There are no additional books, classrooms and other learning material to care for the extra pupils; the quality of education is quite low.”

Insecurity is not the only factor compromising education in Turkana. A gross shortage of teachers is a concern. For example, Nawoyaregae Primary School, with an enrollment of 350 or more school-aged children, has only three teachers.

“This is a great challenge, especially when we have more pupils coming back to school after fighting has subsided. The teachers get overloaded, and this is not good for the pupils,”

Omukaga, the school’s head said. He said he would need about nine to be comfortable.

The situation is replicated in neighboring East Pokot, where the majority of schools have just two or three teachers serving over 200 students.

According to Mutuku Mwenga, the education chief in the area, teachers have been shying away from being deployed in areas such as Turkana and Pokot, largely due to the insecurity.