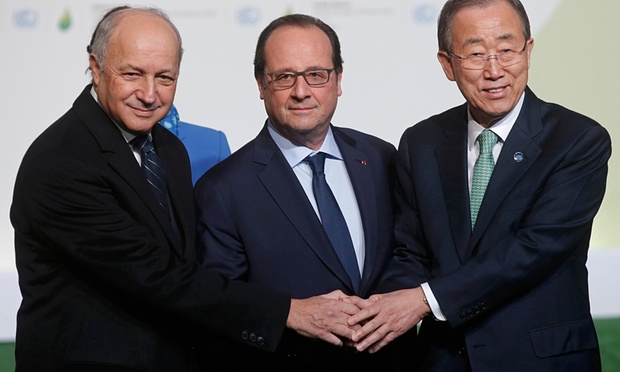 As the world dithers on climate change, hotter weather could extinct Africa Njoro Township in Nakuru. This would become a costly town to live in
due to degradation and limited resources. [Photo: Njenga Hakeenah]

As the Climate Change Summit concluded in Paris, the resolution was a pleasing one if it is carried through and implemented.

For the first time, the world gathered to agree on cutting carbon emissions and to discuss cutting-edge production technologies to keep average global temperatures below two degrees.

Africa, a continent which is among the poorest of continents, has its future teetering as the financial burden on several fronts soar.

Unless something is done urgently, a warmer globe will mean huge financial challenges in adapting to climate change for a continent which emits the least greenhouse gases.

In 2013, the United Nations Environmental Programme (UNEP) estimated the costs that would be incurred and the aftermath of a 4 degree warmer world.

Adaptation costs for Africa could reach approximately $350 billion annually by 2070. This is if the two-degree target will be significantly exceeded, while the cost would be around $150 billion lower per year if the target is to be met.

The report; Africa’s Adaptation Gap, endorsed by the African Ministerial Conference on the Environment (AMCEN) whose secretariat is hosted by UNEP, confirms the World Bank’s Turn Down the Heat Report that there is a 40 per cent chance that we will inhabit a ‘3.5-4°C World’ if mitigation efforts are not stepped up from current levels.

The African continent already faces adaptation costs in the range of $7-15 billion per year by 2020. These costs will rise rapidly after 2020, since higher levels of warming will result in higher impacts. A shrinking river in Kajiado County. A hotter world would mean more suffering for those who rely on such resources. [Photo: Njenga Hakeenah]

The combination of adaptation costs with “residual” damages could reach 4 per cent of Africa’s Gross Domestic Product (GDP) by 2100, under a 3.5-4°C scenario.

If no adaptation measures are taken, damages are expected to cost 7 per cent of African GDP by 2100 in a ‘3.5-4°C World’, according to the Africa Gap report.

“Missing the 2°C window will not only cost governments billions of dollars but will risk the lives and livelihoods of hundreds of millions of people on the African continent and elsewhere,”

“Even with a warming scenario of under 2°C by 2050, Africa’s undernourished would increase 25 – 90 per cent. Crop production will be reduced across much of the continent as optimal growing temperatures are exceeded. The capacity of African communities to cope with the impacts of climate change will be significantly challenged.”

In all scenarios, the capacity of African communities to cope with the effects of climate change on different economic sectors and human activities is expected to be significantly challenged, and potentially overwhelmed, by the magnitude and rapid onset of climate change impacts.

To reduce the magnitude of the impacts and their repercussions for African livelihoods, adaptation measures at different levels, from households to national and regional levels, are being planned and implemented and need to be further supported and strengthened.

The measures include developing early-warning systems for floods, droughts or fires to help populations anticipate and prepare for the occurrence of extreme events, irrigation, improvement in water storage capacity, reforestation to protect surface water systems, sustainable use of groundwater resources, desalinization of seawater, and rainwater catchments and storage to maintain sufficient and reliable access to fresh water for human and agricultural needs.

Most of the Middle Eastern countries already desalinate their water but it comes at a huge cost to the govt. This would mean it could be unachievable on the continent unless resources are available large scale.

Other measures include city infrastructure protection measures such as seawalls, dykes, wave breakers and other elements of coastal zone management, as well as city-level food storage capacity and urban agriculture to enhance food security and improving design and drainage technology of sanitation facilities to reduce the risk of water-borne diseases in the aftermath of extreme weather events.

The majority of these and other adaptation measures require an anticipatory and planned approach, as well as large investments. The need for planned capital-intensive adaptation is greater at high than low warming levels.