Since the discovery of the Maize Lethal Necrosis Disease MLND in Kenya in the year 2011, efforts to manage it have been in high gear.

This is to ensure that the country does not suffer food insecurity where maize is the staple food.

The Constitution of Kenya declares access to food as one of the basic Human Rights thus underscoring the importance of seeds and agricultural productivity.

The Kenya Government has established-with funding from the Syngenta and the Bill and Melinda Gates Foundations, the Naivasha Maize Lethal Necrosis Screening facility which could be key in addressing maize seed-related issues. 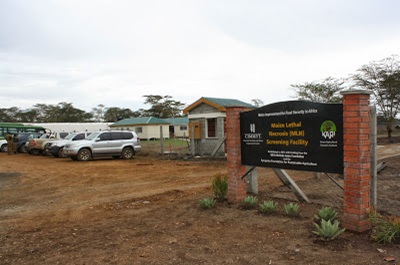 The MLND screening facility in Naivasha. It is meant to address issues on maize. [Photo: Njenga Hakeenah]

“If seed quality is compromised, all other inputs will not help much as the source of crop life is not completely viable to give quality life”, explains Dr. Mahuku.

This in turn he says, compromises productivity affecting yields as well as probably contaminating future crops if the seeds are harvested and used later.

In a country where biotechnology is frowned upon and treated with skepticism, Dr. Mahuku opines that it could be the solution to managing MNLD as genetics could play a key role towards this end. He also advocates crop rotation and using clean seeds.

Kenya’s reliance on maize has threatened other food crops-mostly referred to as orphan crops – making it hard to address food insecurity.

Dr. James Nyoro, an agronomist says of the over-reliance on maize,

Nyoro adds that Kenyans need to move away from this mentality and adopt other crops for food if they are to avoid the perennial food shortages and in many cases droughts.

Orphan crops like sorghum, millet and others have for long been sidelined from meal tables which gave maize an edge but risking the country’s food security.

“The country needs to diversify if it is to comfortably feed the burgeoning population. Otherwise, if we stick with the same old policies and structures, this will remain a dream for a country aiming to be a middle-income country by 2030,” Nyoro quips.

The adoption of several food crop varieties would give Kenya an advantage in feeding the burgeoning population. The government is in the meantime mulling a two child per family policy in a bid to slow down population growth.

With this growth and speaking at a time when the country has experienced huge losses occasioned by the MLN disease, Dr. Nyoro opines that policies should also be put in place and implemented especially surrounding seeds whose quality determines the harvest outcomes.

He says that Kenya’s seed industry is dominated by one company and which is a threat to food security. He adds that the company had access to publicly developed materials and continually receives subsidies from government so it can offer seed prices at subsidized levels. However this lack of a level playing field has occasioned high costs but low quality seeds risking food insecurity.

Kenya’s vision 2030 is heavily premised on the success of Information Communication and Technology (ICT) and agriculture which remains the single biggest employer at 24 percent of the GDP.

Syngenta East Africa’s MD Walter Njenga says food demand is on an increase and it’s challenged by low productivity. He says technology can play a major role in ensuring that Kenya becomes food sufficient. This is echoed by the Kenya Seed Trade Association of Kenya (STAK) Chair Azariah Soi who intimates that adopting innovative technologies will increase agricultural productivity placing Kenya in an advantage position to deal with food insecurity.

The issue of biotechnology and especially around Genetically Modified Organisms (GMO) remains shrouded in mystery in Kenya. Those against GMOs fear that the foods will be a threat to health and also to indigenous farming.

Those who are pro-GMO say that the fears are unfounded and this means will keep experiencing the perennial food shortages. They say that biotechnology should be used to augment agricultural output.

Wanjiru Kamau from the Kenya Organic Agricultural Network (KOAN) says it is better to continue with conventional and traditional farming rather than introduce a technology which may prove fatal in the future.

As an organic farmer she feels investing in GMOs would be a risk and a gamble with the future food security issues.

And as this tug of war between those for and against biotechnology continues, the country is losing billions invested in research as well as unnecessary deaths due to lack of food.

If this continues, then it means that the country’s ambition of attaining food security and the Blueprint Vision 2030 remains a mirage.