The fight against elephant poaching got another boost yesterday after police managed to recover 100 kg of elephant tusks valued over Ksh. 10million.

According to a tweet by the Directorate of Criminal Investigations (DCI), the tusks were seized on Tuesday in the afternoon in Murang’a County’s Kangari town, where four players in the illegal trade were also arrested.

The four; Martin Mungai Nginya, 58, Peter Macharia Njuguna, 32, Edward Mwambura Kamau, 55 and 43-yr-old Samuel Njuguna Mwirigi were found in possession of 19 pieces of the jumbo tusks were arrested by a multi-agency team christened ‘Interpol Usalama 7’ which has been pursuing the notorious syndicate ambushed the suspects in two separate motor vehicles parked…strategically ready for transaction, a KBT 660T Toyota Allion and KAP 374V Toyota 100. 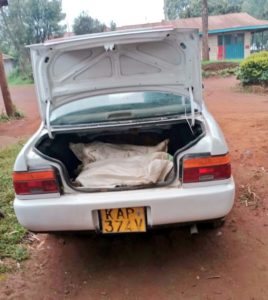 “The Special Service Unit-led team confiscated the forbidden cargo stashed in the Toyota 100 boot in two sacks disguised as bags of cabbages. The suspects have since been placed in custody undergoing investigative interviewing, with detectives seeking to effect more arrests on possible poachers and the targeted market for the products.”

The arrest has elicited various reactions with some tweeter users happy that they had been arrested while others, mainly due to ignorance of the crime and its effects or just pushed by hard economic times felt that the four should be allowed to ’hustle’

“Good job for arresting them. But the biggest encouragement done to this type of criminal activity is attaching value. When the value (10Mn) is attached, it encourages even more of those poachers to try their luck,” said Justin Wachira 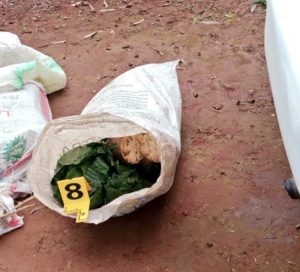 “Sad! Those guys look so local. They must have poached in the aberdare forest which is less than 40km from kangari. They couldn’t be doing cross border trade. I feel sad for the elephants killed. May that evidence be sufficient to convict them. Crime doesn’t pay!” said Engineer Geofrey Kim

When called out by other users she said: “Corruption and unemplyment is leading to all this mess. Let the government fix this then the wanjikus can have fit survival tactics.”

The human –wildlife conflict also played out with one Stanley saying; “In Laikipia elephant’s are killing innocent people but they are not arrested its so sad let the people hustle.”