Prof. Kibwana joins his constituents for the Jukumu Letu launch in Makueni County

Jukumu Letu, an initiative geared towards creating a proactive populace through awareness on the Constitution and issues centered on governance using artistic works was over the weekend launched in Makueni County.

The event that took place at Unoa grounds and graced by Governor Kivutha Kibwana, was a culmination of a one week training of various artists on their role in nation building and brought together thespians, puppeteers, musicians, bloggers and Disk Jockeys (DJs) from across the county, all with an ultimate goal of educating the residents on the constitution through their performances.

The artists wowed hundreds of residents who turned out for the event with arty masterpieces whose themes ranged from good governance, the role of the citizens in implementation of the constitution to issues that have bedeviled the county like perennial water shortage, sand harvesting to the current leadership wrangles between the governor and the Members of the County assembly (MCAs).

The Jukumu Letu Creative Director, Gregory Mwendwa speaking during the launch said that initiative is meant to help the locals internalize the Constitution through simple acts of arts like music and theatre. Mwendwa said ”

While the promulgation of the Constitution in 2010 was a right step towards proper governance there was a dire need for the citizens to understand their role in implementing the constitution noting that art as multimedia platform can be used to put the spirit of constitution in the practice. “Through art, characters that reflect what happens in the society are created and used to communicate to the people to highlight what needs to be done besides addressing social ills,” he said.

Head of DJs with a Cause, Richard Mwendwa popularly known as DJ Ritchie said besides playing music that touch on issues of governance in events, the group aims at forming a movement that will promote constitutionalism through playing positive music. DJ Ritchie noted that while most electronic media like radios and TVs shun such songs due to low demand, socially conscious music need not be boring adding that the group will create interesting mixes and post them online and distribute them to clubs and matatus.

“If such music is played regularly people will eventually appreciate it and put into practice the songs advocate for,” he asserted. Susan Kikanga, a thespian and head of the MAPACA theatre team, stated that plays can be used to do civil education because they are interesting and attract a large audience that cuts across all ages. Kikanga argued that issues like economic exploitation, sand harvesting, corruption and joblessness among the youth that are rampant in Makueni can be addressed through fictional characters giving the population a chance to examine themselves, laugh at their follies and reflect on what needs to be done.

“Residents should know that it is their responsibility to implement the Constitution, and address social evils. In Makueni mango farmers are exploited by middle men who buy mangoes at sh5 and sell them at sh20 while sand loaders are paid a paltry sh200 while the harvesters rake in millions of shillings,” she asserted, adding that the people should be enlightened on such rights.

Director Tsunami Puppeteer Group, Paul Mbuku also speaking at the launch added that puppetry is another form of art that can be used to enlighten residents. Mbuku whose group performed during the launch lauded the initiative emphasizing that his group will soon roll out similar performances on civic education.

“Puppets are very interesting and through manipulation you can create whatever character you want,” he said.

The director however disclosed that funds were a challenge and called on willing donors to sponsor the noble cause.
The music group led by Stephen Mulinge from Ngomeni Jazz created new renditions titled Kiwu, Isasi and Ni Kyau Kithuku whose messages resonate with the myriads of challenges faced by the residents. Kiwu addressed the issue of water problem while Isasi touched on the shoot out at the county assembly that left six people injured. Ni Kyau Kithuku sought to examine the underlying causes of the leadership wrangles in the county that have brought the county to the verge of dissolution due to what the governor has termed as irreconcilable differences between him and the MCAs.

Mulinge noted that music was a popular way of communication and such songs will of course have a positive impact on the people. 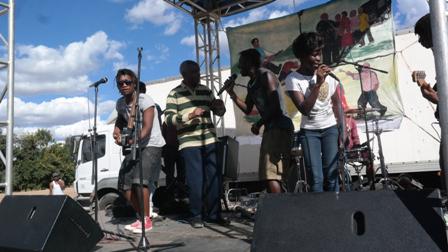 Makueni Governor Prof. Kivutha Kibwana joining Sarabi Band on stage as they sang ‘Sheria’, one of their hit songs on governance

Governor Kibwana urged the residents to be proactive and put the county leadership to task on issues that affect them. He noted that the power of the people was vested in the Constitution and asked them to take advantage of their constitutional rights and demand for good leadership. He termed the initiative as a success and underscored for the same to be replicated across the country.

“Devolution is the way to go, and these artistic performances have a very strong message that should be put into practice,” said the Governor.