﻿﻿Of government funds that never benefit the target population The Ugandan playwright John Ruganda talks of situations in life when “you bleed the leech to fatten a heifer.” A leach is a parasite such as a tick, and thinking of how its blood can be used to fatten a heifer is classic irony.

Yet this is what happens in many situations in Kenya when funds meant for development end up in the pockets of the people in power through corruption. In so doing we bleed citizens who like the leach have no blood to fatten the leaders who like the heifers already have enough.

This is what cartoonists at the Jukumu Letu launch in Nakuru today will be showing to citizens the whole day in the event that will take place at the Nyayo gardens.

One of such cartoons shows an Member of County Assembly (MCA) who has taken funds belonging to the youth to benefit himself. Either the cartoon also shows the youth have to bribe the MCA if they are to get their rightful share of government funds.

The cartoons also depict the cat and mouse games that citizens go through as they seek funds from the government. 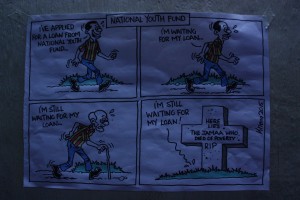 This cartoon decrying the time it takes before one can receive funds after applying for them (Photo/Kioko). A cartoons on the affairs of the funds for the elderly. Sometimes citizens also aid leaders in mismanaging funds (Photo/Kioko).

However all these funds capture  what Ruganda observes of bleeding the leech to fatten a heifer.

While in some instances citizens have not been following up on the funds, some have been aiding their leaders to mismanage the funds.