When in 2013 an American diplomat cautioned Kenyans against electing the Jubilee duo because of the crimes they were facing at the International Criminal Court (ICC), he did not know his statement would go viral.

The three words sentence ‘choices have consequences’ not only became a common statement during the March 2013 campaign period but stuck among Kenyans. Today it is common to hear folks using it to caution each other or to laugh at the other’s mistakes and folly.

And as the Jukumu Letu campaign is launched in Nakuru, citizens will also be reminded about the statement as they are made to reflect on the quality of leaders they elected in the last elections.

A number of the cartoons that will be exhibited during the launch aim at showing that devolution cannot succeed under poor leadership. So then, if the citizens made such mistakes in electing them, they are to face the consequences. The cartoonists want citizens to understand that if they elect bad leaders they will end up with bad leadership (Photo/Kioko).

The cartoons also depict the ‘curse of devolution’ as the ‘bossy attitude’ among county officials as well as corruption among Members of County Assemblies.

A cartoon on corruption among MCA’s. County governments have been accused of embezzling funds and thus killing devolution (Photo/Kioko).

They also depict poor leadership as having a leader who keeps on shifting the goal posts and never delivering on his promises. 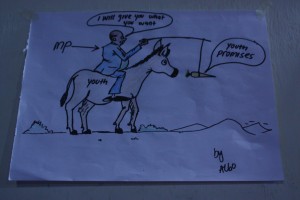 Fake promises among leaders has also been identified as ‘curse of devolution’ (Photo/Kioko).

Indeed choices have consequences but it takes an individual to see effects of bad leadership as consequences of poor decisions in the ballot stand. One can only hope that Nakuru citizens will reflect well and be ready to do wiser decisions on governance of their county.