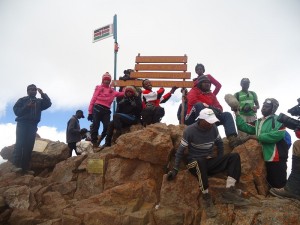 When I first heard of Mt Kenya Climb to Educate Charity Campaign, my thoughts quickly ran to back in high school and I remembered students who could barely afford to stay in school as they lacked adequate school fees. In high school we paid just about sh13, 000 for a whole term. Then the school would offer to pay your school fees if you were a good performer and it worked out for majority of the students until we were done with school. Now the years have passed and the tides have turned it is now three years into campus and the thought of these financially needy students escaped our minds because we were busy building careers and getting ready to be self-sponsored adults.

One thing has remained constant all through be it as it may, are the financial problems with students. Students need school fees, clothes, and money to support their up-coming talents. They also need credit to call home once in a while, books and stationary and laptops among others. The government does as much as it could but more often than not you will find students taking academic leaves due to financial issues. Parents can only handle so much, so they prioritize taking younger siblings to school and you totally understand and agree with their motive but what do you do? In an ice cold world few options are left to make a way through and the light at the end of the tunnel grows dimmer and dimmer as times progresses and your dreams come crushing all around you like hail.

The Higher Education Loans Board (HELB) will throw a sh14, 000 loan at you and suggest you make it sh17, 000, pay your fees then sort your food somehow but then that is as much as the government can do and for that we are grateful. The community will raise you, support you up your feet and hold you close to its bosom like an infant, pay your fees, give you pocket cash and send you to school with utmost expectancy if you are lucky, if you are not, you may have to seek  an academic leave due to financial reasons.

Dedan Kimathi University of Technology students found this inhuman and decided none of their own would have to go through this and therefore came up with the Climb to Educate Charity Campaign. This campaign saw to it that the school had its own endowment fund whereby students who could not afford their schooling had an assured source of support. So when you would go to queue in front of the registrar’s office with a heavy heart and out of choice to ask for an academic leave because of finances, he would pick your hand and lead you to class assuring you with reasons beyond doubt that everything would be okay.

Climb to Educate launched on early this year and saw a population of about 300 and staff climb up Mt Kenya in February this year to Lenana peak 4, 000 and 85 KM above sea level. And through the intrepidity of the mountain. Together students and staff combined, we sought to catch the county’s eyes and ask for them to light this lamp that had been turned off at the end of the tunnel and they did. Sponsors had come in and promised to work hand in hand with us. Amongst them was the Kenya School of Adventure and Leadership, Vevo Energy, The Senate, students and staff. That was February.

The Chairman of the initiative Mr Darius Muthui Mindu is a very energetic and passionate leader, he keeps everyone on their toes with energy chants all through and hilarious jokes. In contrast to the first edition, the second edition initiative has put in plans to bring in more students and staff, more corporates and the Nyeri County Government as sponsors. Apart from that, the physical fitness group has launched martial arts training for interested participants. Languages such as German and French have been introduced also for interested candidates.

The Dedan Kimathi University endowment fund is now open for contribution all over the world visit www.dekut.ac.ke for details.