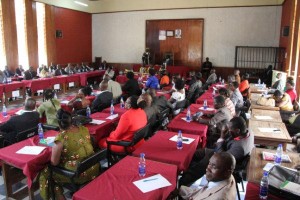 Much of the unsupported expenditure reported in the Homabay County Assembly arises from non-surrendered imprests. Imprests are cash advances given to government officers that must be returned or accounted for with proper records. They are often not returned or accounted for and sometimes officers who have failed to account for them are allowed to obtain new imprests against government policy.

The Homabay MCAs received imprests of sh50,000 each per month for ward office expenses totaling to sh24, 000,000 in the financial year 2013/2014. However, no records were maintained to show how the money was utilized.

The forty MCAs of Homabay County received imprests of sh20,000 each per month to pay rent for their ward offices, all totaling to sh9,600,000 in the 2013/2014 financial year. However, there was no lease agreement made between the property owners (landlords) and the County Assembly as required.

Unaccounted for Imprests for Transport Allowance

Unaccounted For Provision Sum and Contingency

Included in the Bill of Quantities for the refurbishment of the County Assembly Hall was a provisional sum of sh1,000,000 for electrical works. Physical verification of the project revealed that no electrification works were carried out. The funds set aside for electrification were paid for services not rendered.

Purchase of Furniture by MCAs

The MCAs were given imprests of sh200, 000 each to purchase furniture for their Ward Offices. They purchased the furniture from various supermarkets without following the required procurement procedures. Afterwards, the total sh8,000,000 given to the MCAs for the purchase of furniture was not accounted for and there was no evidence produced to confirm that the furniture have been taken on charge and recorded in the Assets Register.

Payment of Mobilization Fund to MCAs

During the 4th quarter of the year under review (April to June 2014), the (40) elected Homabay MCAs were each paid sh100, 000 all totaling to sh4, 000,000 through their bank accounts. The purpose of this fund was to mobilize citizens to participate in the determination of ward offices site. Nevertheless, the payment vouchers were only supported with list of names of Members of County Assembly and the authority from Salaries and Remuneration Commission (SRC) in form of circulars to pay the fund was not produced for audit review. Consequently, the propriety of the payment could not be determined.

Summary of the sh51M unsupported expenditure in Homabay County Assembly