For two years, 55 year old Priscilla Kaniaru has been confined to her house in Kiamunyi area in Nakuru. What started as an off and on loss of vision ended up in a battle to survive.

In an interview, Kaniaru said that she fell ill after the delivery of her last son 19 years ago, but the effects of her mysterious disease started two years ago when she began experiencing various ailments which were recurrent and not directed to one condition.

Now she says she is currently experiencing a feeling of “being sick”. 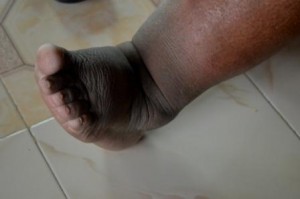 “My last born son always asks if I ever wore high heels. He finds it hard to imagine me in them especially now that I have swollen feet,” says Priscilla (Photo: Kioko Kivandi).

Her addiction to salt, which saw her craving for it to a point of finishing a whole packet daily, was one of the many symptoms of her strange disease.

“I have different diseases characterized by chest pains, hoarseness of the voice, a massive weight gain, painful muscle and joint pains, fever some times, (as well as) severe and chronic ulcers at the legs,” she added.

Even though she has been to the best hospitals in and out of the country, doctors are finding it hard to pin down her symptoms to one particular disease.

Over time she has become almost a medical expert. She describes the different diseases she has been suspected as ailing from with a lot of ease. Her knowledge is deep.

“I was (once) told I also could be having graves’ disease – most likely developed as a result of stress during delivery of the last born. I also have bulging of the eyes, stasis dermatitis and stasis eczema that on the legs that end up discharging serous fluid, and take too long to heal making me immobile,” she added.

The hardest part of being sick was the fact that she had to keep visitors away from her house to avoid contamination.

“At first people thought it was rude for me to stop them from visiting me or even ask them to keep away. I also had to wear a dust mask when they were around. However, eventually they started accepting that it was not my fault and even understood why I had to leave the room when they came in,” she added.

Kaniaru cannot move outside the house as any speck of dust affects her breathing system. All the time she is forced to use an inhaler to clear her lungs.

A lover of art, Kaniaru, with the help of her sons, engages in design and painting.

“I love beauty and since I cannot spend a lot of time outside I prefer engaging in creative designs which often end up in my shelves,” she added.

Coincidentally, her last born is also developing interest in creative arts and has been designing coffee tables made of waste tires. A coffee table made by Priscilla’s son. Priscilla is herself a lover or art (Photo: Kioko Kivandi).

She also laments that her current image has erased her sons memories of her.

“My last born son always asks if I ever wore high heels. He finds it hard to imagine me in them especially now that I have swollen feet. He has also never seen my skin smooth or dressed in a short designer dress.”

Although she has been in India once, doctors there still could not decide what was wrong with her.

“We went to different hospitals in India but unfortunately each doctor would come and diagnose a different disease and give me different drugs which ended up clashing in my body and making me more ill,” she added.

She however needs go back to India for a different treatment. But she needs sh5 million for the treatment.

“The doctors now think they can be able to pinpoint the disease to lupus which they say is treatable.”

Popular gospel musician Alice Kamande who is spearheading the campaign to help her raise the money needed to oversee the treatment called on Kenyans to help her walk back to health.

“We are appealing to everyone of goodwill to help us look into how we can be able to get her to the right doctors and help her be as productive as she was before,” she added.

Her pay bill number 198784 and goes with her name, Priscilla Kaniaru.