Mbuvi Kasina, an activist and businessman from Kitui County is facing six counts of improper use of licensed telecommunication system for calling for accountability in the management of Constituency Development Funds (CDF) of Kitui South Constituency.

Kasina has been charged with the six counts and defamation by the area legislator Hon. Rachael Nyamai for posts he made in a Facebook Group ‘Kitui South Leadership Oversight Board’.

I would be amazed if you referred to big lady as beautiful, she is the most ugly woman in Kis. Nothing to admire, big legs like elephants not mentioning shapeless body

This MP has left everyone baffled. She is every happy when people die from Kitui South so that she gets an opportunity to meet with the people and endear to them. She must be a sadist. Lipstick mingi kwa mdomo anakaa kama anakula mitura mbichi ama ameramba damu. Am bitter. We want out 137 million back. Lete pesa yetu.

The MP is a sadist. How do you place point man in every sub-location to be reporting to you the people who have died so that you may go to funerals to campaign. Talk of crocodile tears at best.

Some other comments are in Kamba language.

The charge sheet says Mbuvi made these comment knowing well they are false for the purpose of causing annoyance, inconvenience and needless anxiety to Hon. Racheal Kaki Nyamai. 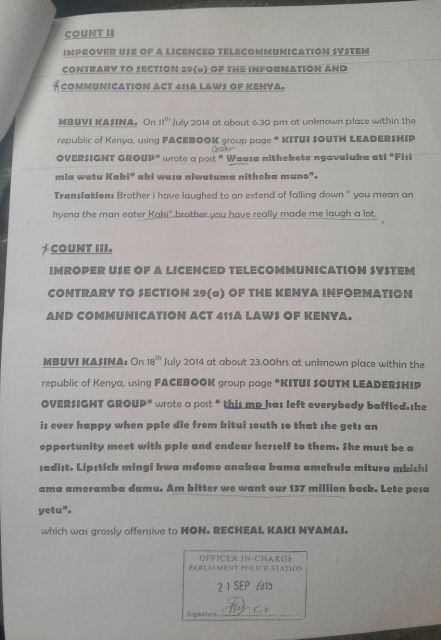 Kasina said that the Constituency Development Fund Board also frustrated their efforts to get this information. Correspondence between him and the office indicate that they did receive the letter he wrote and later said that the information he wanted was in public domain. The CDF Board responded. The Board noted that they had received the letter and that the Constitution guarantees them the right to seek information about how CDF funds are being used. They later wrote another letter stating that they had gotten feedback from the CDF Fund Manager in Kitui South Constituency that Mbuvi and Joseph Kyutu had never visited the CDF offices and also that the information they want is in public domain. 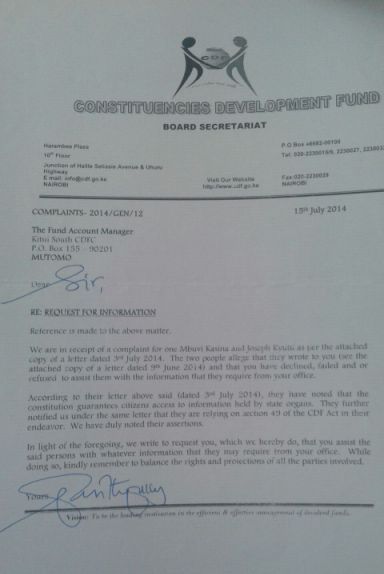 The defamation case is civil suit no. 219 of 2014 while the improper use of licensed telecommunication system is CR1125 of 2014 at the Milimani Law Courts.

Improper use of licensed telecommunication system is explained in Section 29 of the Kenya Information and Communication (KICA) Act 2009 as;

Kasina denied the charges and is out on bond.

He wrote letters to the Director of Public Prosecutions (DPP) who then recalled the file for direction.