Candidates who sat the Kenya Certificate of Primary Education (K.C.P.E) exam at the camp for the Internally Displaced Persons (IDP’s) in Pipeline Nakuru are citing only one thing for their ‘dismal’ performance in the exam.

The candidates who were displaced following the Post Election Violence (PEV) that rocked the country eight years ago say lack of electricity at the camp hampered their studies throughout their primary school life.

Apparently the camp was not connected to the power grid until October last year when its residents benefited from a government electrification programme that targets marginalized areas. The primary school leavers who spoke to Kenya Monitor said while this was a blessing, it had come too late.

“I used to wake up at 3 am to read using a paraffin lamp, but sometimes it would dry up,”

“I would then be forced to sit in the open and read with moon light or just sleep and wait for day light when I would go to school and read from there,”

Wangari who wants to be a doctor added.

It will be noted that when the violence happened the candidates were very young. About 5-6 years of age. They were evicted from areas such as Molo, Eldoret, Nandi, Kericho among others. The students said the fact that their parents had to start on life afresh affected their studies.

“Most of the time we would be sent back home during remedial classes that teachers were charging at sh200 per month,”

added Wangari who was on her way to the farm when this interview was conducted.

Joy Wanjiru who also went to Nairobi Road Primary also cites lack of electricity at the camp as the reason she did not score her dream mark of “350 and above”. The first born in a family of 3 who scored 295 says generally the ‘tough’ life at the camp hampered her performance. She wants to be a journalist and her role model is Citizen T.V presenter Lulu Hassan.

“I just love the ways she anchors news. We don’t have a T.V but I usually go to watch news at my aunt’s who also lives at the camp.”

Stephen Wainana who scored 294 at the same school wants to be an Aeronautical Engineer. It pays well he says. He too cites the lack of electricity as the reason he did not score more than 320 marks that he had dreamt of.

“The paraffin lamp used to hurt my eyes, so I was unable to read well. I would wake up in the morning and go to school to read from there,” he said. 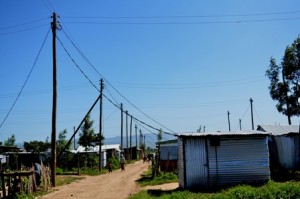 Faith Wanja is among those you would refer to as excellent performers at the camp who went to Nairobi Primary School. She scored 311 marks. Apart from the use of paraffin lamps she blames lack of books for her “poor” performance since she had wanted to score at least 350 marks. She wants to be a doctor.

Like her is Jecinta Nyambura who is the best candidate among those who went to Nairobi Road Primary and who spoke to Kenya Monitor. She scored 330 marks which is really a good mark considering her situation. Nyambura lives in the camp with her mother and five siblings. Their father was killed in Burnt Forest during the chaos. Apparently she said, she did not have any difficulties reading with a lamp.

But the camp also had its stars. Lucy Nyambura who scored 352 marks and another Rachael Wangari who scored 404 marks. The two were students in private schools but had their roots in the camp. They too cited general difficulties at the camp as impediments to excellence in academics among IDP children.

“We want good shelter. That will help us read well,”

said Wangari while Nyambura urged for assistance to the youth at the camp.

“We need a polytechnic for the youth. Some are even becoming drug addicts,”

Nyambura who wants to become an economist said.