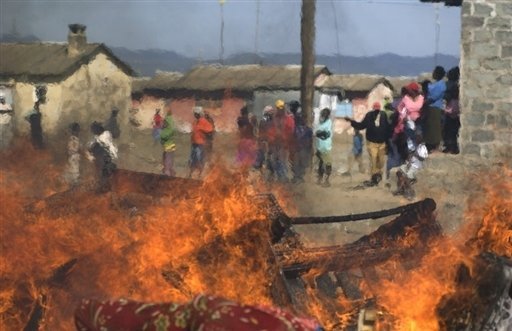 Why should witches be burnt? The Witchcraft Act in the Kenyan Constitution 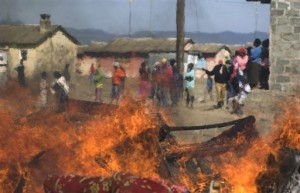 A major human rights scandal that has been neglected for ages

‘It is late Afternoon in Nyamataro Village. I hear wailing sounds filled with anger and excitement. At first, my mind churns that it could be a celebration of release of young men from the circumcision dens. I keep peeling my cassavas. Today, I am preparing my favorite ‘city-meal’ for my granny. The wailing turn into ugly grunts a midst screams for help and it goes on and on. I walk out of the hut only to be greeted by smoked air, full of unpleasant meaty smell. I reach out to my neighbor who seemingly had left earlier for this ceremony. I then call the assistant chief who is a close friend of my granny. We then head to the community square.

The sight on arrival is not that to stare twice; not even once. Five human beings set on fire. I am dumbfounded by this unfathomable act. The assistant chief explains to me that these are witches who have been torturing the people in this village. He does not seem disturbed by the sight. I am quite terrified and trying so hard not to show my disapproval of this act. One villager shouts pointing towards me ‘She is the last born of the witches’ daughter’ the rest shout even louder ‘Which one?? Throw her in’ ‘Throw her in’ ‘She deserves to die’. My legs start to shake, my intestines turn upside down, and my heart is jumping out of my throat. I can’t even breathe. No air. All I am seeing are numerous enraged lions and tigers heading for my flesh. What crime have I committed?’

Among many other evils, burning of witches both male and female has continued to happen in Kenya and other African countries. Perpetrators carry out these activities in broad day light. These witches are majorly elderly women who have dependents and relatives. Burning of witches is clearly a major human right scandal that no one has ever been prosecuted of. This, among other acts of mob justice is never taken into serious consideration. Hardly is anyone prosecuted for an act of mob justice.

Burning of witches are by all means a cruel and crude mechanisms of punishing individuals. Why is nobody stepping forward to effect punishment for persons who lynch witches and burn in broad day light?

Not long ago, highly graphic videos of women being burnt mercilessly were doing rounds on social media and even mainstream media. Witches in Kisii and Nyamira were beaten and burnt in broad day light. How do such atrocities take place in modern society without any action being taken? These monstrosities were not the first of their kind in this region. They occur regularly. They put our country to shame and above all subjected the victims to excessive pain. The relatives of the victims also experience a lot of depression seeing their loved ones dying in broad day light and not even the law can protect them.

The law clearly outlines that ‘no one should be condemned unheard’. All humans of Kenya and all over the world must be treated as innocent until proven guilty in a court of law.No one has any rights whatsoever to burn another to death irrespective of their wrong doings. They need to be given a chance and only be sentenced by the law.
A long term solution needs to be designed to help end these monstrosities ones and for all. This will require the entire community involvement. These witches also have a right to life. They have the right to live freely without fear of discrimination of violence of whatever kind. If proven guilty of any crimes, they need to be sentenced in a court of law.

The knowledge I have about witchcraft tells me, sometimes a witch has no control over their powers. In such a case, they could be a nuisance to the people around them. And, in turn infringe on their rights and freedoms as citizens of Kenya. In the Kenyan Law Cap 67, Witchcraft Act which protects the public against acts of a person practicing witch craft. It states that “any person who holds himself out as a witch doctor able to cause fear, annoyance or injury to another mind, person or property, or who pretends to exercise any kind of supernatural power, witch craft, sorcery or entrenchment calculated to cause such fear, annoyance or injury, shall be guilty of an offence and liable to imprisonment for a term not exceeding five years.” We all have the right to sue any one practicing witch craft. We are protected by the law.

Then, what happens when someone takes the law into their own hands to punish? or rather, to beat mercilessly and burn to death. What does the law provide to protect the witches from being mistreated by the members of the public? Once a suspected witch is dead, they are dead.

Section 6 of the Witchcraft Act talks about charging persons with witchcraft. It states that “Any person who accuses or threatens to accuse any person with being a witch or with practicing witchcraft shall be guilty of an offence and liable to a fine not exceeding five hundred shillings or to imprisonment for a term not exceeding five years:Provided that this section shall not apply to any person who makes an accusation to a District Commissioner, a police officer, a chief or any other person in authority.” Does this section render the members of the public helpless? How then will you prove someone is a witch in a court of law?

The perpetrators of burning of witches are guilty of murder which is punishable through life sentence or such other punishments that may be declared in a court of law.