The Constitution Guards Against Violation Of Human Rights 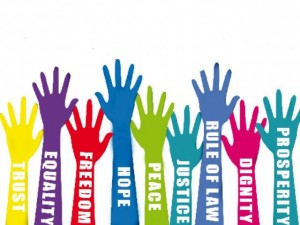 The respect for human rights is one of the basic postulates for an ideal society that acknowledges the right of all to search for happiness and advance the greatest happiness for the greatest number of people.

The constitution reaffirms faith in fundamental human rights, in the dignity and worth of the human person and in the equal rights of men and women to promote social progress and better standards of life in larger freedom.

Guided by the rule of law, the bill of rights seeks to protect individuals from tyranny and oppression and subjects all individuals to equal treatment, including right to equal opportunities in political, economic and social spheres.
It protects all citizens from all forms of discrimination on any grounds and like the UDHR it recognizes that all human beings are born free and equal in dignity and rights. They are endowed by their creator with reason and conscience and should act towards one another in a spirit of brotherhood.

In its defense for basic human rights that are unalienable, the Kenya constitution stands tall in the assembly of the world’s most progressive constitutions and appreciates that all men and women are created equal and that they are endowed by their creator with certain unalienable Rights.

It presents limitations to these especially where in enjoying these rights, individuals may limit the rights of others. In upholding the freedom of expression in article 33, also expressed in article 19 of the International Covenant on Civil and Political Rights, the constitution provides that the right to express oneself does not extend to propaganda to war, incitement to violence, hate speech and advocacy of hatred.

Kenya has in the past faced ethnic violence and killings that have been attributed to incitement to violence and hate speech against member of particular communities.

The constitution seek redress to such errors of the past and becomes the vanguard of the individual to exist and take pride in being a Kenyan.

It is now 51 years since Kenya was redeemed from the yoke of the British Empire. The entire colonial venture was an unjust cause that violated the right of the African to exist in the land of his forefathers. At independence the first dance of freedom was soon over and people realized they had new masters to serve and violation of human rights marked the first 4 decades of independence.

The Bill of Rights stands guard against any institution now and in the future that may limit the right of individuals to enjoy those rights.