Empower men in Nyeri and central Kenya to be responsible 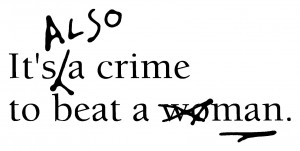 Around the world, Gender-Based Violence (GBV) impacts the lives of thousands of families; the main focus of this resource package is on violence against women and girls. This is not to say that gender-based violence against men does not exist. For instance, men can become targets of physical or verbal attacks like we have witnessed too often in Central Kenya. Everyone has the human right to live free from violence. Gender Based Violence is one of the world’s most pervasive human rights violations.

What makes battering of men so prevalent in Nyeri County? How do we solve this unusual phenomenon? Throughout the years we have applied various methods to help minimize if not eliminate the acts of GVB, how then did the tables turn. Have we been doing zero work? Some may argue that so much effort has been put towards female empowerment thereby neglecting the male species. Others may claim that female empowerment has degenerated into feminism such that women no longer complement men but instead compete with them on an equal level. This may be a positive gain in the work context but a family structure is different. GBV is especially prevalent to cases of poverty. In these settings, family, community protection and support systems have broken down, and abuse of power occurs frequently.

In my opinion this is a unique problem that boils down to very many factors. My mother told me that for a woman to go to the lengths of assaulting a man she has already reached her breaking point. Taking all previous cases of husband battery, you will notice a common denominator. Most of the male victims of GBV reported have been alcoholics. I don’t understand how any sober man would stand to be assaulted to the degree of injuries that we’ve witnessed. If a woman came up to attack me, sure she would maybe manage a slap or two before I got her under control but she certainly wouldn’t have enough time/strength to ‘uninstall’ a transformer.

I’m not going to let a few deadbeats to ruin both the reputation of the men and women in Nyeri County. A lot of these men in the village live a life of drinking, and contributing nothing or very little to the family. Such a man will go home every day and expect food on the table and make a noise and sometimes become violent if he finds none. Alcohol is funny, why would someone think they can fight when they are most unstable? For a woman to raise a hand to a man, she must have been completely fed up. We heard of a man who was beaten because of selling their home radio to buy alcohol. Not even a loaf of bread or something that would benefit the whole family.

In my neighborhood there is a den that trades alcohol in that you place an item on the table and you’re served as much illicit alcohol as that item is worth. Probably that’s where the president and his team should raid first. So, is it okay to beat up deadbeat husbands? NO. It is said that good people solve problems but smart people eliminate them.

We should come up with simple solutions to this issue as compared to simplistic ones where we usually condemn the acts and initiate court proceedings and a week later nobody talks about it, just waiting till the next attack. I applaud the Presidents move to urge Central Kenya MPs to spearhead the war against alcoholism in the region; however there’s still a lot to be done.

Is alcohol a bad thing? I judge not because there are people who consume it and still manage their lives well. What we need to do after eliminating some of these illicit brews is find a way to empower these men and youth in Nyeri to engage in income generating activities to be able to take care of their families. The women have been ‘forcefully’ empowered by the current situations. Forcefully, because these women have had to take up the roles of being family providers in the absence of the men. This has led to a crumbling patriarchal social fabric and men feeling inferior. If not that, we can economically empower them to be able to afford some decent alcohol. I kid. By empowering them we will have killed a whole aviary with one stone.