At least 4 million children across 14 counties are set to benefit from the National School-Based Deworming Program jointly implemented by the Ministry of Education and the Ministry of Health with technical assistance from Evidence Action.
This week’s exercise, that kicked off on September 14 and closes on September 16, targets children in 14 regions including Narok, Nyamira, Kisii, Migori, Busia, Siaya, Kisumu, Homa Bay, Lamu, Tana River, Kilifi, Mombasa, Kwale, and Taita Taveta Counties.
Speaking during a deworming exercise at the star of the sea primary school in Mombasa County, acting Director of Medical Services and Head Directorate of Preventive and Promotive Health at the Ministry of Health Dr. Andrew Mulwa, said deworming treatment not only improves the health and concentration in school for children but can also set them up for a brighter future.
“Rigorous research – mainly conducted in Kenya in the early 2000s – has shown that receiving deworming treatment can improve children’s school attendance, physical development, and cognition. A study showed that deworming can lead to a 25% reduction in school absenteeism” observed Dr. Mulwa.
Speaking at the same event, Director of Primary Education Nerea Olick, said intestinal worms are a major public health problem in Kenya with at least 6 million children at risk of infection across the country.
According to Dr. Bashir Isaak, Head of the department of family health at the ministry of health, if left untreated, worm infection interfere with nutrient intake, and can lead to anaemia, malnourishment, and impaired mental and physical development.
This year, the National School-Based Deworming Program, saw 2.6 million children dewormed in March 2021 across seven counties in Western Kenya.
The regions included TransZoia, Bungoma, Nandi, Kakamega, Vihiga, Bomet and Kericho Counties.
Six additional counties including Garissa, Kirinyaga, Kitui, Machakos, Makueni and Wajir are set to be targeted for schistosomiasis next year when drugs become available. 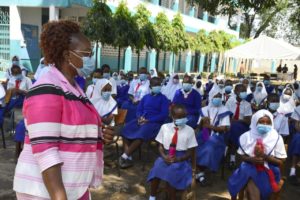 This will be in addition to Migori, Busia, Siaya, Kisumu, Homabay, Tanariver, Kilifi, Kwale and Taita Taveta Counties that will already have benefitted from the schistosomiasis deworming program.
Since its launch in 2009, the program has targeted to treat at least six million children aged 2-14 years in areas at risk of worm infection each year.
The deworming treatment is administered in over 19,000 primary schools and ECD centres by trained schoolteachers, reaching both enrolled and unenrolled children.
The program has become globally recognized, high-impact model for successful inter-ministerial partnership, and has resulted in millions of Kenyan children growing up without having experienced worm infection.
A study conducted by the Kenya Medical Research Institute (KEMRI) revealed that the program has been highly effective in reducing worm infections. According to the study, the prevalence of soil-transmitted helminths (STH) decreased by 62% amongst children sampled in the survey.
Health Cabinet Secretary Mutahi Kagwe had last month held a meeting with officials from the Kenya National Union of Teachers (KNUT). During the meeting, the CS and the KNUT representatives deliberated on a wide array of issues including school health program that integrates nutrition and hygiene as captured in the Kenya School Health Policy.