Fr.John Makewa and his Lawyer Fred Nemisi celebrate outside a Makueni court after the priest was acquitted of attempted murder charges
Photo:Nation

In the wee hours on the 21st day of March 2010, Fr. Fidhelis Nzuki was startled from his sleep by Makueni Parish Father -in -Charge and fellow priest Fr. John Makewa. Apparently, robbers had invaded the parish house located at the outskirts of Wote town and the priest, a  mentor to Fr. Nzuki and a close confidante of close to ten years sought his help to repulse the thugs who had struck the parish residence at around 5.00 am.

Sensing the imminent threat, Fr. Nzuki hurriedly woke up and when Fr. Makewa gave him a pistol and three bullets to confront the robbers, he readily accepted unknown to him that the real danger lurked from within.

While testifying in a case, in which Fr. Makewa was acquitted last week by a Makueni court for attempting to murder him, Fr. Nzuki currently a teacher at St. Paul Seminary Secondary School in Katoloni, Machakos County, said Fr. Makewa after handing him the pistol, requested him to open the door of the corridor leading to the exit door. When he reached for the lock, Fr. Makewa shot him, not once but thrice, injuring him in the abdomen, upper arm and both thighs.

Fr. Makewa would later be charged for attempted murder in a Makueni court in 2010, leading to a grueling five – year legal battle that would see Fr. Nzuki lose the case on flimsy grounds of lack of sufficient evidence. Last Wednesday, Senior Resident Magistrate Richard Koech set Fr. Makewa free saying that the court could not establish whether he shot Fr. Nzuki. 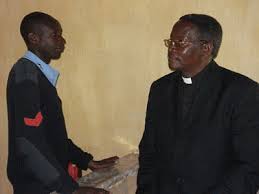 Fr.Makewa in a Makueni court

In his judgment, Koech accused the police of bungling the investigations saying that although Fr. Makewa’s gun had been fired it was not possible to ascertain whether he indeed attempted to kill Fr. Nzuki.

“The police did not produce any spend cartridges and the court cannot therefore establish who shot the priest without cartridges,” said the magistrate.

“I find the accused actions consistent with innocence rather than quilt,” he stated.

But was the evidence insufficient to let Fr. Makewa off the hook? Perhaps not. The ballistic report by the doctor, who examined the complainant, stated that the exhibits that had been dislodged in Fr. Nzuki’s thighs matched the double- barreled shotgun that Fr. Makewa reportedly used to repulse the thugs.

Moreover the 15 witnesses who testified before the court admitted to not seeing any thugs, only Fr. Makewa spotted them, despite a black out on the fateful day.

But the reason as to why a priest would want to kill not only a fellow priest but also a friend is a question that will continue to linger in the minds of many people especially the catholic flock in Makueni that keenly followed the case to its conclusion. Interestingly, even the court could not establish the motive behind the attempted killing.

Although a theory of a love triangle involving both priests surfaced in court as the reason behind the shooting, the picture painted by the two and all the 15 witnesses about their relationship suggested otherwise. From the description, the two were bosom friends and both priests even vehemently denied of any existence of a misunderstand, leave alone a passion wrangle.

“We had never differed on anything for those ten years I knew Fr. Nzuki,”said Fr. Makewa.

A fact reaffirmed by Fr. Boniface Kioko who was sleeping in an adjacent room when whole incident unfolded.

“Their relationship was cordial and there were no tell – tale signs that anything could have been wrong,” said Fr. Boniface.

Fr. Nzuki also admitted being close Fr. Makewa. He was a regular visitor to the parish and on the material day, had traveled from the University of Nairobi where he was pursuing a Bachelor of Education degree to see his friend.

“I would come over the weekends countless times to Makueni to see Fr. Makewa who would assign me some duties in the church and then go back to college,” he said.

On 20th March, he had traveled as usual and arrived in the evening. Together with Fr. Makewa and two other priests, Fr Michael Mutuku, and Fr Boniface and seminarian Boniface Mutua ate supper at the living room and exchanged pleasantries until past midnight when a blackout forced the other priests to retire to bed, leaving the two friends in the sitting room.

“After the blackout we went to sleep and left the two chatting and taking some beer,” said Fr. Boniface.

He told the court he could overhear the jocular conversation between the two but later drifted to sleep only to be woken up by gunshots, some hours later.

“I could hear Fr. Nzuki telling Fr. Makewa how he would soon finish his studies at the university, they sounded happy. I slept and was stirred from sleep by gunshots,” said Fr.Boniface.

He said he heard Fr. Nzuki screaming and responded quickly only to find him lying on the corridor bleeding profusely, from gun wounds.

“We all rushed to the corridor and found father writhing in pain. He requested Fr. Michael to give him an anointing of the sick before he was rushed to the hospital,” said the priest and denied seeing any thugs.

Fr. Boniface narration of events of the fateful day is similar with Fr. Nzuki’s version who feels robbed of justice by the judgment.

“After I went to open the door Fr. Makewa shot me. I told him that he had shot me and even ripped off my manhood but he wished me dead,” he stated in his testimony and accused Fr. Makewa of lying to the court that robbers shot him.

“There were no robbers Fr. Makewa shot me,” he maintained.

However, the script for Fr. Makewa reads different. The priest told the court that armed robbers who had broken into their residence shot Fr. Nzuki. He reiterated his close relationship with Fr. Nzuki saying that he had never in his lifetime harbored any reason to kill his best friend.

“Fr. Nzuki was my best friend, I was even known to his parents in Kangundo. I helped him educate his siblings and took one of them to the army force through my influence,” he said.

He recounted how on the fateful day he was woken up by gunshots.

“At around 5am I saw a flash light and heard a gun shot. When I peeped from my bedroom window I saw five thugs and immediately went to wake up my colleagues including the complainant,” said Fr. Makewa.

He said that he took his shotgun and fired four times through the window and went back to his bedroom to answer his phone that was ringing only for him to return and find Fr. Nzuki lying on the corridor leading to exit door having been shot.

“The robbers shot Fr. Nzuki.I did not shoot him.I did not run out of bullets and if I wanted to kill him I would have used other means,” he said.

Fr. Makewa’s version was however refuted by Makueni Director of Prosecutions Pithon Mwangi who wondered why the priest was the only one who spotted the thugs.

“It’s rather peculiar that none of the 15 prosecution witnesses confessed to have seen the robbers apart from Fr. Makewa,”he argued.

This was not the first time the priest had after all misused his gun, he had while serving at Katangi parish, according to the state counsel exchanged fire twice, allegedly with gangsters and one instance shot and injured a burglar who reportedly tried to gain access to the parish residence.

Why the magistrate choose to overlook the evidence by the prosecution and let the accused off the hook while an earlier judgment had convicted the priest to seven years in prison for the crime is baffling. In 2012, Tawa Senior Resident Magistrate Mr. Gichimu Waititu found the priest guilty and handed him the seven-year sentence. The case had been referred to him despite a full trial by Makueni Principal Magistrate Joseph Karanja  who declined to give a verdict amid bribery allegations. Fr.Makewa led out of the Tawa court room after he was convicted to seven years in jail

However, Fr. Makewa successfully appealed the case and a Machakos high court ordered a retrial that has now set the once influential and powerful priest free.

Fr. Makewa’s counsel Fred Nemisi while celebrating the victory faulted the Tawa court for sentencing his client to seven years.

“The court erred in convicting my client with no concrete evidence, finally he has been vindicated,” he said amid cheers from Fr. Makewa’s supporters.

He expressed confidence that his client would be given back his guns which police confiscated after the incident and that he would also be reinstated back to serve his faithfuls in the Catholic Church.

“Now that my client has been set free he should be given his weapons and granted a chance to serve in the church,”he said.

Nemisi in his submission had put a strong defense and that could probably explain why they won the case. The lawyer had argued that his client was an upright man and a development conscious person who dined with who is who in the country.

“My client is very influential and a man of his stature cannot surely commit such an offense. I plead with the court to make a fair judgment,” he said.

After Fr. Makewa was set free, the lawyer could not hide his joy and extolled the magistrate for what he termed as ‘solomonic ruling’.

“My client has suffered for long, justice has finally been served,” said the elated Nemisi.

While Fr.Makewa and his supporters continue to celebrate the triumph, the judgment has also continued to draw mixed reactions.

Notably, Fr. Nzuki has expressed his disappointment on the outcome of the case. 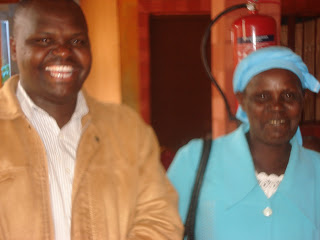 Fr.Nzuki and his mother in Tawa court

“There is no justice,” he said.

Asked why he never forgave Fr. Makewa as a man of God, the priest said that the accused had never been remorseful.

“Fr. Makewa has never admitted that he shot me, neither has he ever asked for my forgiveness,” he said.

Rita Mutuku, a resident and a faithful at Makueni parish concurs with Fr. Nzuki.

“It is no secret that Fr. Makewa was responsible for the crime, am saddened that the court decided to let him free but we hope and pray that God will deliver justice,” she said.

“If Fr. Makewa shot Fr. Nzuki what other evidence did the court want?” posed Ms. Mutuku.

Thaddeus Masila also a resident said from the judgment it is evident that the court overlooked critical evidence.

“There is no justice in this judgment, quite discouraging,” he said.

Masila has no kind words for Fr. Makewa.

“I hope he will not come back to Makueni, his actions were a disgrace,” he said.

Kenya Monitor last Friday caught up with Fr. Makewa at the Wote police station on a mission that he declined to divulge. He was upbeat and looked forward to a bright future.

“Am happy that am now free. I have been a priest for the last 30 years and I have diligently served my duties. I have initiated a lot of projects in Makueni and Katangi and others areas that I have worked,” he said.

He disclosed that the five years that he had been ex-communicated by the church was the worst in his life and at one point castigated the media for ‘disparaging’ him.

“The media should report objectively,”

With the conclusion of the case Fr. Makewa can enjoy his new found freedom while one can only hope that Fr. Nzuki who says that he escaped death by a whisker will find somewhere in his heart to forgive the perpetrator of the heinous act.